Just after midnight we are about 3 or 4 hours from Isla Mujeres. The night was pitch black but clear. The northern entrance to Isla is tricky so Bert will decide what we’ll do when we get there. We made easy radar contact with Punta Norte. I’m on watch and exhausted from working all day and I’d love to sleep but there’s no choice. Besides, first landfall is an important milestone. I ate a snack to wake myself up. Bert and I are both tired but we must press on. We arrived at Isla Mujeres around 2:00 A.M. and began negotiating the northern entrance by observing lights and checking against the charts and GPS position. Observing the lights was extremely difficult because the whole area is so built up and urbanized that the marker lights are lost in the clutter of other lights. Complicating it even more is the numerous airports and airstrips in the area whose beacons have colors and flash patterns nearly identical to the marine markers. What genius thought this up? I wondered to myself whether the intention is to cause accidents rather than prevent them. There are cases in history where folks have intentionally moved lights in order to cause ships to run aground so they can be looted, but that’s not the case at Isla Mujeres — I hope. Haha.

Once we were past a particular point that Bert was looking for we could relax a bit so we both went out on the Portuguese bridge and stood while the autopilot steered the boat. There was a warm breeze and we enjoyed the sense of the boat moving through the water, the sound of the bow wave, the darkness. It was a very pleasant moment to stand out there quietly for a while as the coastline slid by us on both sides. When we reached a certain point not far from the entrance to the bay behind Isla Mujeres we dropped anchor in the clear shallow water. Even though it was 3 AM, Bert cooked up a celebratory meal and we treated ourselves to a bit of rum. We talked for a while and I crashed at 4 AM.

Bert planned for us to get up at 7:30 AM but I awoke to the sound of the main engine starting up at 9:00 A.M. I was very glad for the additional sleep. We motored over to the fuel dock and tied up. Amazing crystal clear blue water and very shallow. We took on fuel to top up the wing tanks, mid tank, and filled the forward tank. There were many very interesting boats in the bay so I took photos during the run into and out of the bay. We even saw an old oil tanker that Bert recognized. It used to move fuels around up in Maine. We motored out to a spot in just 12 feet of crystal clear water and anchored for lunch. 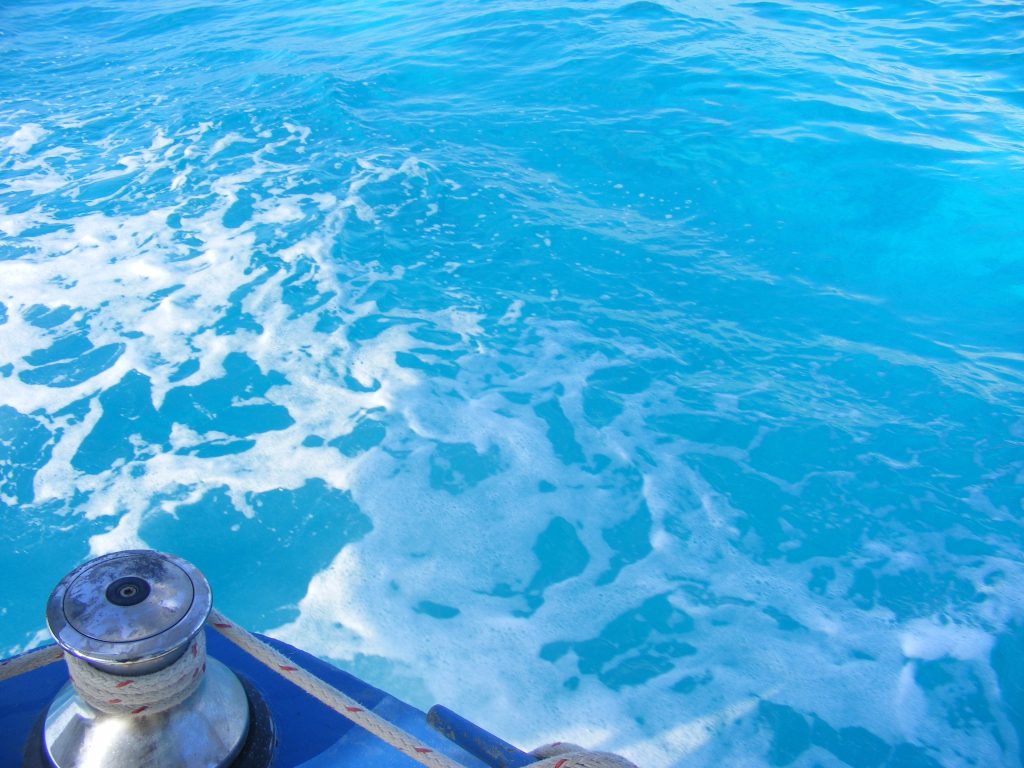 The Waters of Isla Mujeres. Click to view larger. 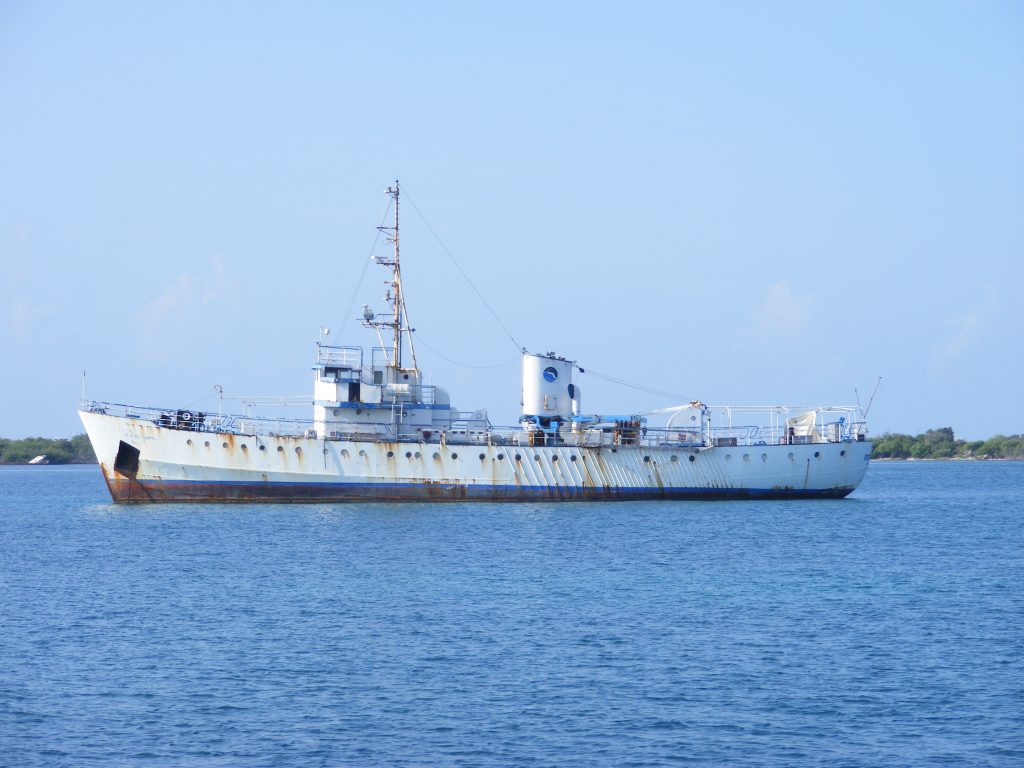 Old boat anchored in the bay at Isla Mujeres. Click to view larger. 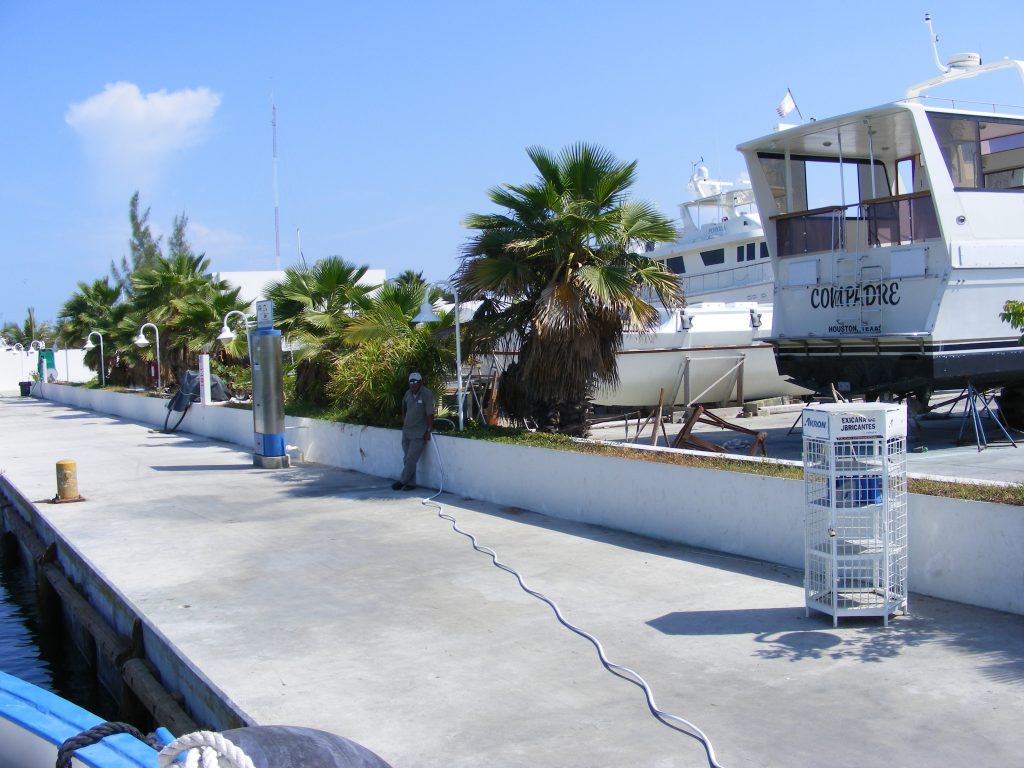 Tied up at the fuel dock at Isla Mujeres. Here we took on 1,500 gallons of diesel, filling all tanks to our full 4,500 gallon capacity. Click to view larger. 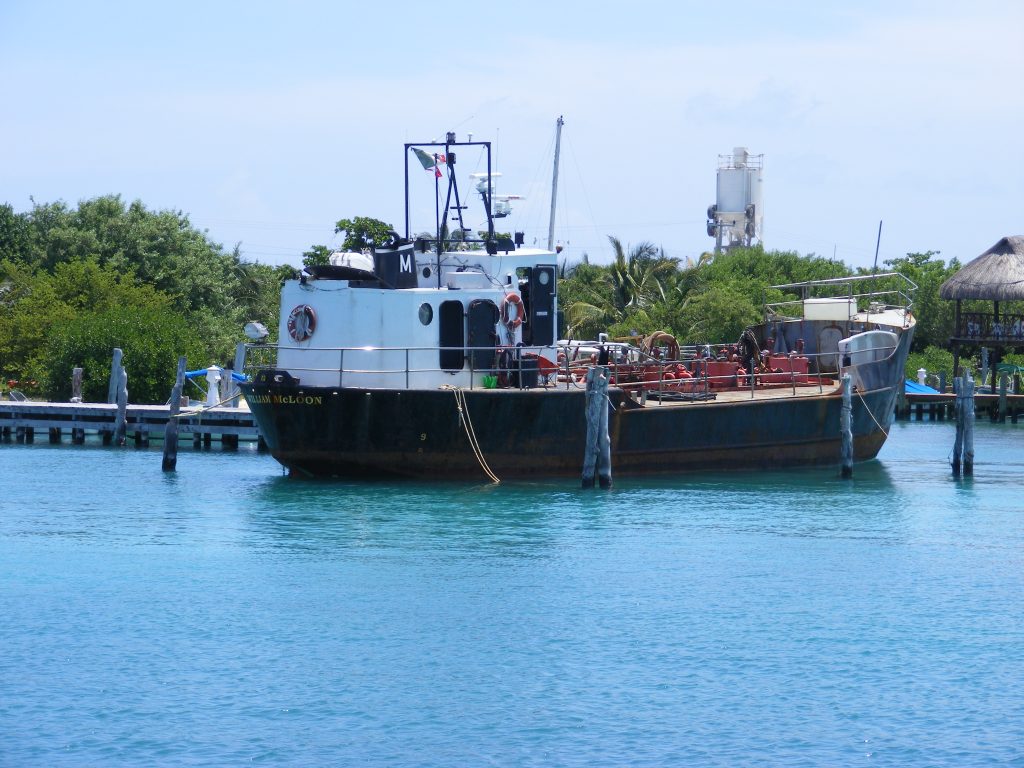 Here’s the William McLoon, a fuel tanker that Bert knew in Maine. What are the odds of finding it here? Click to view larger.

After lunch we decided to take a swim but first we decided to try lowering the “birds” (stabilizers). We had tried a new method for temporarily raising them and so we tried lowering them but discovered that we had a bad tangle that took 2 hours and brute strength to straighten out. The one bird we untangled down at deck level which required detaching the bird and its chain from the boom and then reattaching it. The second bird I decided to go up to the Texas deck and see if I could untangle it up there before lowering it. This worked quite well even though it required me to lift the bird by hand to work the tangles out. To my surprise I discovered that my strength had increased dramatically over the last month and I was strong enough to do it. (The birds are heavy). Once it was untangled it lowered nicely into position. Then, pushing the booms out from their unusual position (inboard, past center) was another trial of strength. My joints popped and cracked in a very satisfying manner but I again surprised myself at the amount of force I was able to come up with. Once the booms were out, and after adjusting the forward tensioners, we were ready to go. 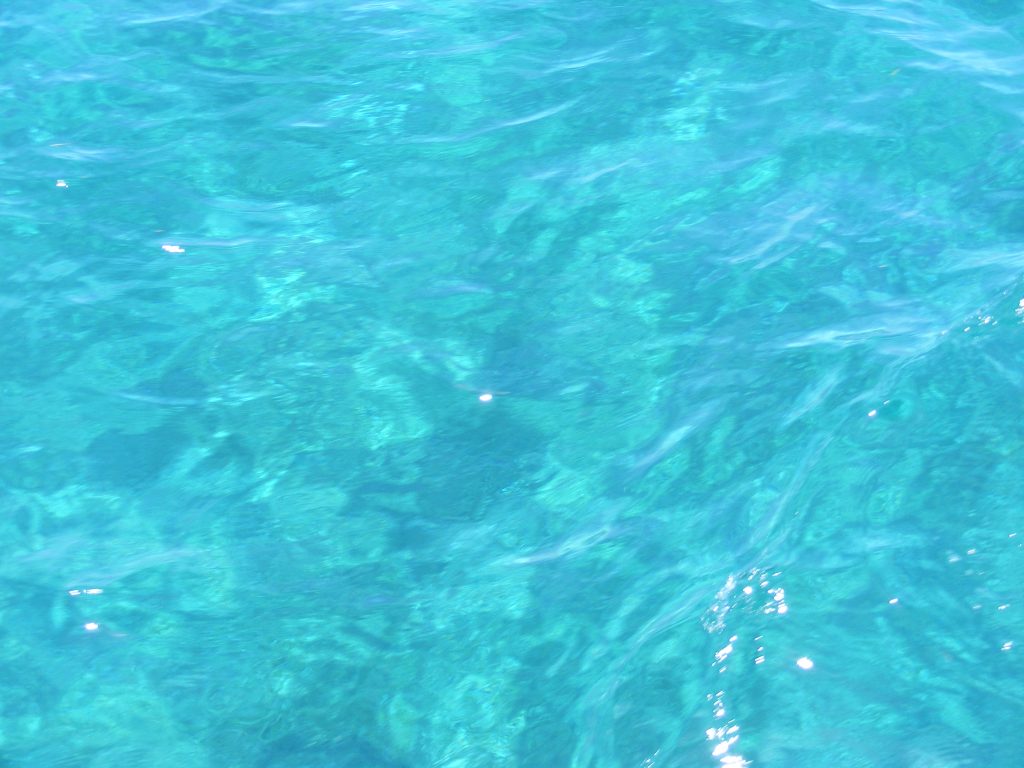 Anchored in 12 just feet of water in a strong current. The water is absolutely clear. Click to view larger. 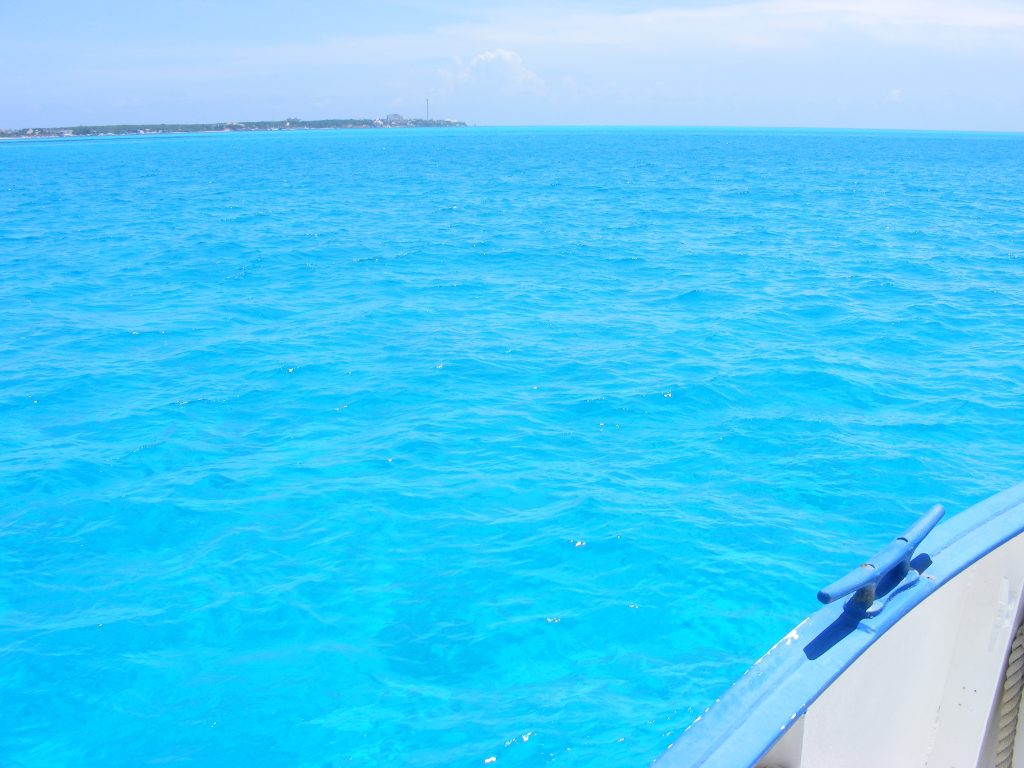 Finally, we took a cool-off swim. The 75 foot safety line was a must in this spot. The current was more than 2 knots. Even so, I put on a dive mask and had a look around in the clear water. The bottom was pure white sand and not a living thing in sight. We washed off with fresh water, raised anchor, and got under way again. When we got out from the protected waters and things began to get rolly again, I lowered the birds. They worked flawlessly. We passed Cancun, miles and miles of hotels and beaches, and the seas gradually got rougher. Bert was trying to avoid the treacherous currents in this area and we hugged the coast. At times we were making 6.8 knots over the ground. But as we approached Punta Brava we were forced to fight the current. 2.5 to 2.8 knots is all we could manage and it took hours to fight our way around the “rock awash” (on the chart), and all the while we were getting knocked around by the confused swells. Most of the swells were on our stern and the Simrad autopilot had to fight hard to maintain course. It does a fine job. I have the watch while Bert gets some much-needed rest. 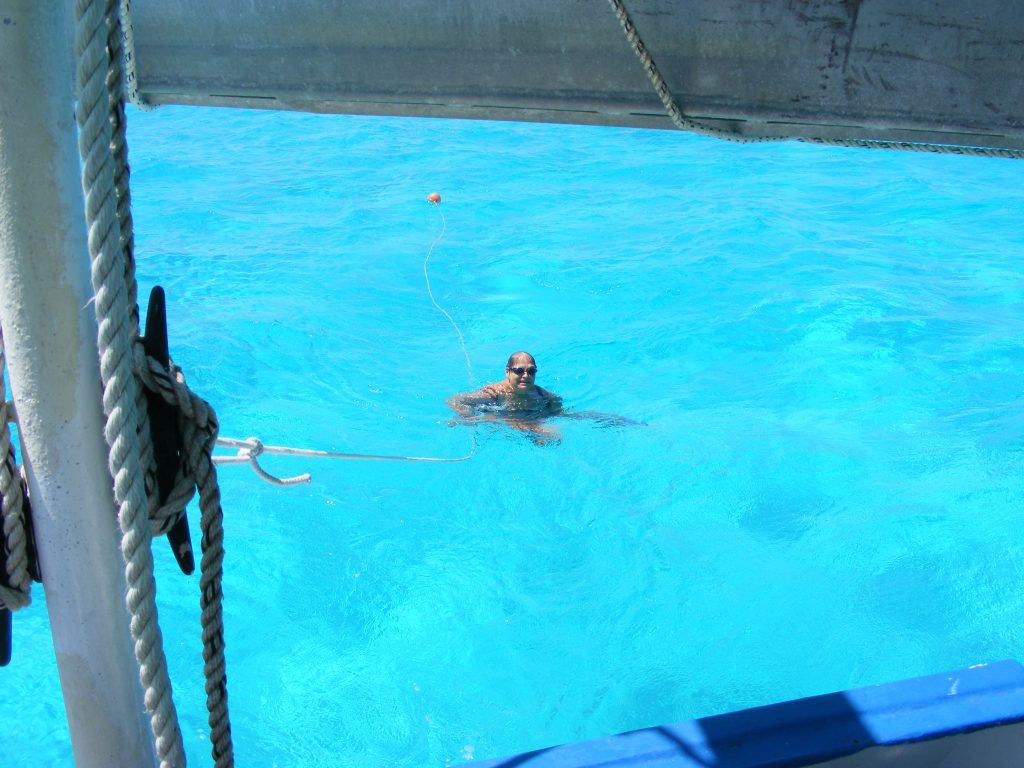 Nancy in the water off the stern of M/V Vagabond at Isla Mujeres. Click to view larger. 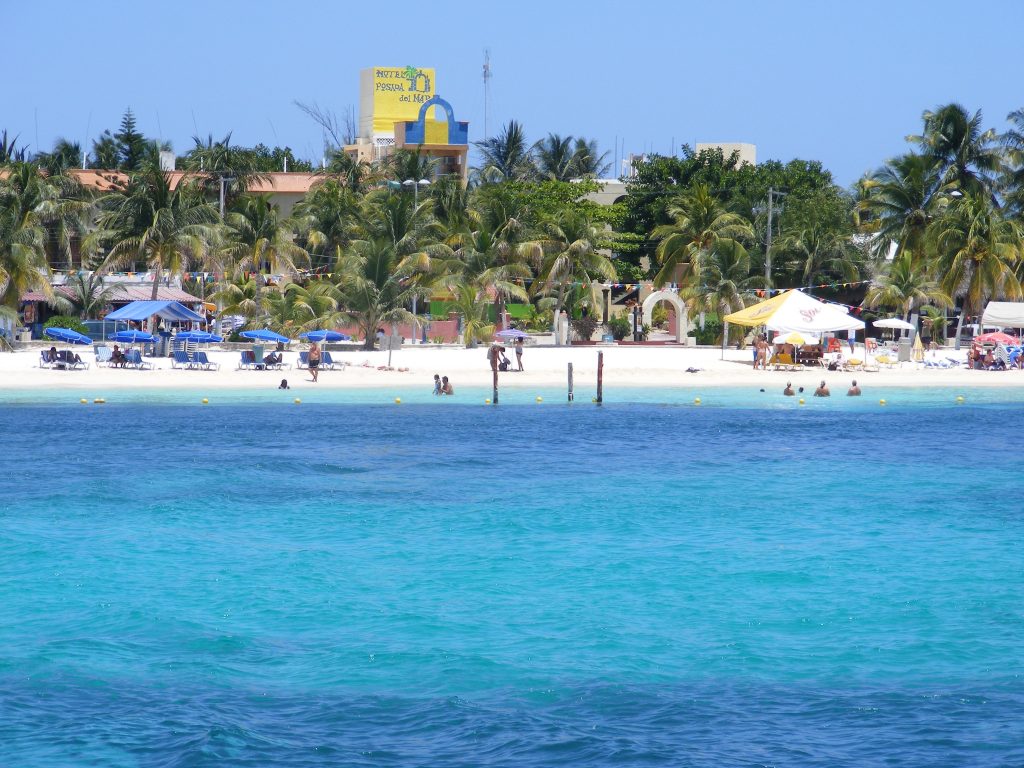 The beach at Isla Mujeres. Click to view larger.